In this instalment we'll look at some more of the Hadoop-specific jobs.

This Hadoop job produces either a correlation or covariance matrix (in a format that Weka's Matrix class can parse). It can handle numeric or nominal data (or a mixture of both) but the correlation matrix is only computed from the numeric fields in the data. Like the other remaining Hadoop jobs in the distributedWekaHadoop package, it requires that the ARFF header job be run first, and will run it automatically for you unless the -use-existing-header option is specified. The correlation matrix job relies on the summary meta data attributes computed by the ARFF header job so that it can compute the matrix in one pass over the data.

As explained in the first instalment, the map tasks compute a partial matrix of covariance sums for all rows in the matrix using their chunk of the data. The reducer phase aggregates on the basis of individual rows in the matrix, so the maps output rows of the full, but partially computed, matrix one at a time. This allows plenty of parallelism in the reduce phase, but does create lots of final output files (one for each reducer) that contain some of the rows of the final matrix. The job automatically tidies this up by reading all the part-r-xxxxx files and writing back to HDFS the final matrix in Weka's textual format. The job has an option to specify how many nodes are in the user's cluster, and then sets the number of reducers to min(num nodes * max reducers to run in parallel per node, num rows in the matrix). 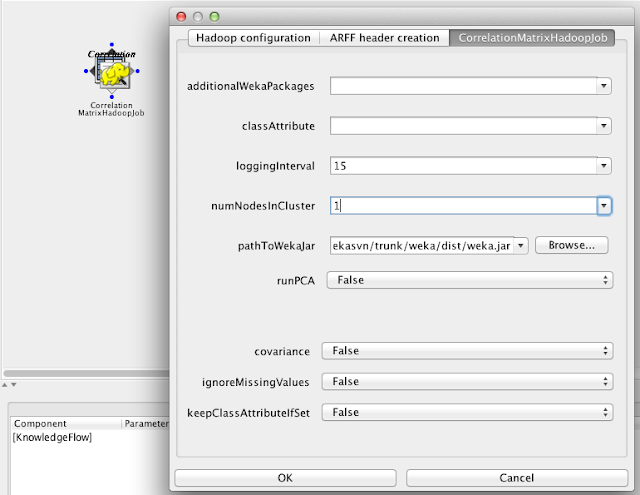 The job also has options to specify a class attribute (which, if it happens to be a numeric field, is not part of the correlation analysis unless "keepClassAttributeIfSet" is selected) and run a principal components analysis in a post-processing phase after the job completes. The later does not distribute the computation of PCA - it runs locally on the client machine and the results are written back into the HDFS output directory. As PCA has a runtime that is at best quadratic in the number of input fields, this phase of the job is suitable for datasets that don't have tons of attributes. The PCA phase also creates a special serialised Weka filter that can be used for pre-processing in the classifier job. 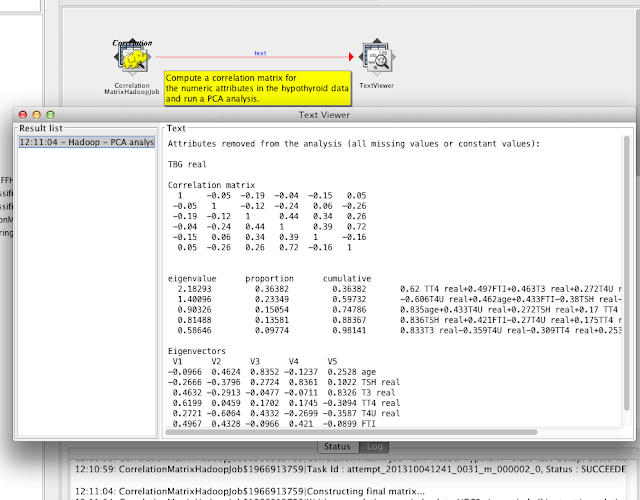 This job uses map-reduce to build classifier models in Hadoop and is one of the most complicated due to the number of options it provides. It will run up to three distinct jobs types depending on options:

The optional randomised chunk creation phase gives greater control (compared to using the mapredMaxSplitSize option) over the number of maps actually run in the model learning phase. This is because 1) at least one map is used to process each distinct input file, and 2) the job provides options to either specify how many chunks to produce or how many instances should be in each chunk. This phase will also stratify the chunks, if the class is nominal, to ensure that each has approximately the same distribution of class values as the original dataset. The funky Hadoop MultipleOutputs class is used to write to multiple files from the reducer.

Note that separate runs of the randomised chunk creation phase may not be deterministic (even with the same random seed) due to the fact that keys (there is one per chunk) output from the map tasks are not guaranteed to arrive at the reducer in the same order from run to run, combined with the way the reducer "deals" instances out to the output files. However, once run, the randomly shuffled chunks may be re-used in subsequent model building and evaluation tasks. 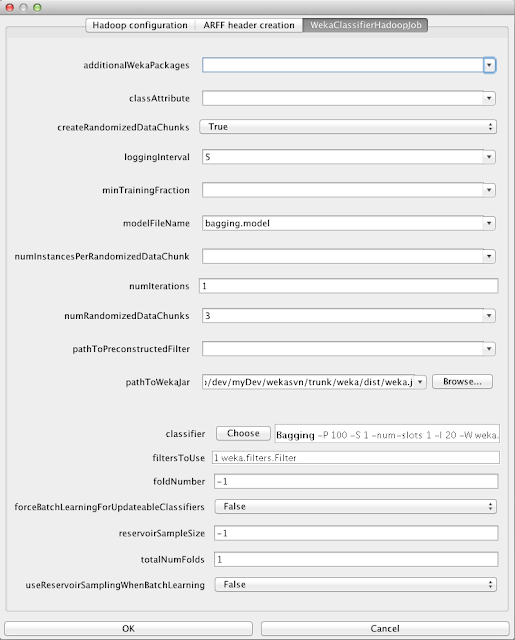 The model learning phase handles a number of different training scenarios:
In the case of non-aggregateable classifiers, the final model produced in the reduce phase is a voted ensemble of the models learned by the mappers. For the technically oriented, this is essentially a "Dagging" model. In all cases, the final serialised model is deposited in a "model" subdirectory of the output path of the job in HDFS, along with a copy of the ARFF header (sans summary attributes). The header can be prepended to new data sets and makes the model ready for deployment wherever required.

A note on Bagging: The job makes a special check for Bagging (actually for any method that extends weka.classifiers.IteratedSingleClassifierEnhancer) and will divide the total requested number of base models by the number of map tasks that will be run. Thus Bagging runs in each mapper in order to produce some of the total number of base models requested by the user. The random forest algorithm can be implemented by setting the base learner to RandomTree in Bagging. I guess the final model produced by using Bagging in Hadoop in this fashion is actually a Dagging one again, with the small difference that the base models trained by each map will have training datasets created by bootstrap sampling on the data chunk that enters the map.

The classifier job has a number of options to fine tune the creation of the final model: 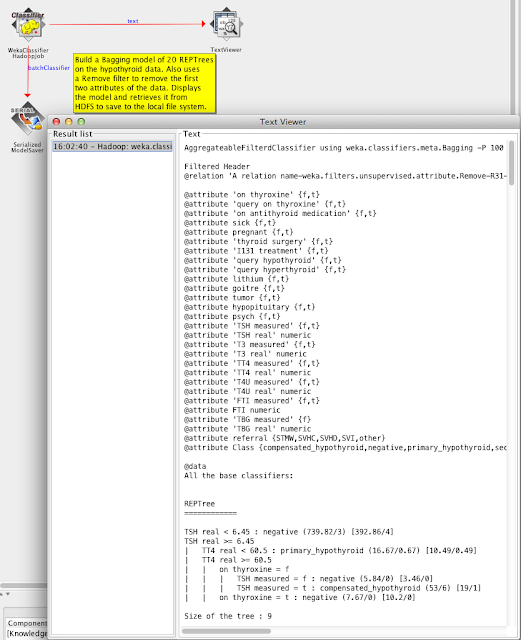 There are a couple of Hadoop configuration properties that can be useful when running the Weka classifier training job, particularly when running batch learners. The first is  mapred.child.java.opts. This allows you to specify arguments to the JVM that the mappers run in, and is particularly useful for increasing the amount of heap space. The default is 200Mb, which is not a lot. The heap space can be increased by supplying the -Xmx argument. Another useful property to be aware of is mapred.task.timeout. If the task tracker does not hear anything from a mapper/reducer for 10 minutes it will kill the task. When the Weka classifier map tasks are training batch classifiers all the action happens in the cleanup() method of the mapper - so there is no feedback to the task tracker (such as writing some stuff to the output for each input key/value) until the very end. If batch training takes too long the task tracker will kill the model building job! Increasing the timeout to something longer than the default 10 minutes can definitely help for more powerful (slower) batch learners. These Hadoop-specific configuration properties can be supplied on the command-line via the -user-prop option, or in the "User defined properties" table of the "Hadoop configuration" tab in the Knowledge Flow step dialogs.

Hmm. I thought I'd be able to cover everything in two instalments of this series of blog postings. Looks like I'll need a third. To be continued...
Posted by Mark Hall at 18:42