This is the third of three posts covering some new functionality for distributed processing in Weka. The first and second installments covered base functionality and some of the Hadoop-specific wrappers. In this post we'll look at the remaining functionality in version 1.0 of the distributedWekaHadoop package.

This job builds on the classifier training job covered in installment 2 and provides map-reduce tasks to evaluate classifiers via the training data, a separate test set or cross-validation. Apart from ARFF header creation and the optional randomisation/stratification phase (both of which are re-usable once run initially), the evaluation job involves two passes over the data. The first builds the model and the second performs the evaluation.

The evaluation job adds only a few options over and above those in the classifier job. You can specify the number of nodes in your cluster so that the job can specify up to k reducers for a cross-validation. Weka's evaluation module computes just about all of its metrics incrementally in an additive fashion (perfectly suited to aggregation). The only exceptions are area under the ROC curve and area under the precision recall curve. These require predictions to be retained. By default, the evaluation job does not compute these two statistics. They can be computed by providing a number for the "sampleFractionForAUC" option. This allows the user to specify some percentage of the total number of predictions generated to be retained (via uniform random sampling) for computing these two statistics. In the above screenshot, we've set this to 0.5 - i.e. 50% of all the predictions generated in all the map tasks will be retained.

In the earlier discussion of the classifier training job we used it to build a model on all the data. It can also be used to train a model on a specific fold of a cross-validation by setting the "foldNumber" and "totalNumFolds" options. When the evaluation job uses the classifier job to perform cross-validation it sets the "foldNumber" option automatically in order to learn models for each of the folds. All we have to do when configuring the evaluation job is to set the "totalNumFolds" parameter.

The output of the evaluation job is the standard Weka evaluation results text (like when the Explorer or command line interface to Weka is used normally) and the metrics stored in a single line CSV and ARFF file. All of these files are written out to the "eval" subdirectory of the output directory in HDFS for the job. 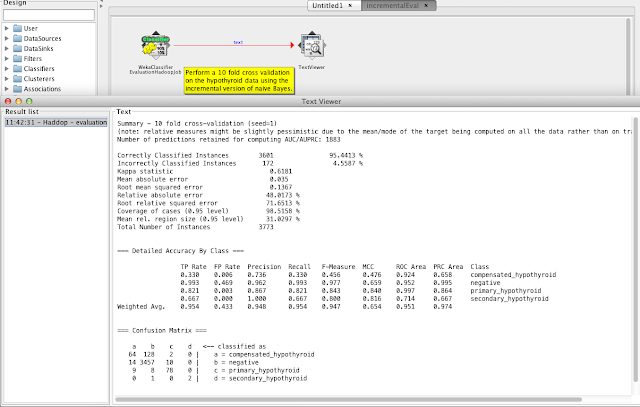 The last Hadoop job in the version 1.0 release of the package is one to perform scoring (prediction) using a trained model. This job actually handles scoring using clusterers as well as classifiers, even though there aren't any clustering tasks/jobs in version 1.0 (stuff to do for version 1.1...). 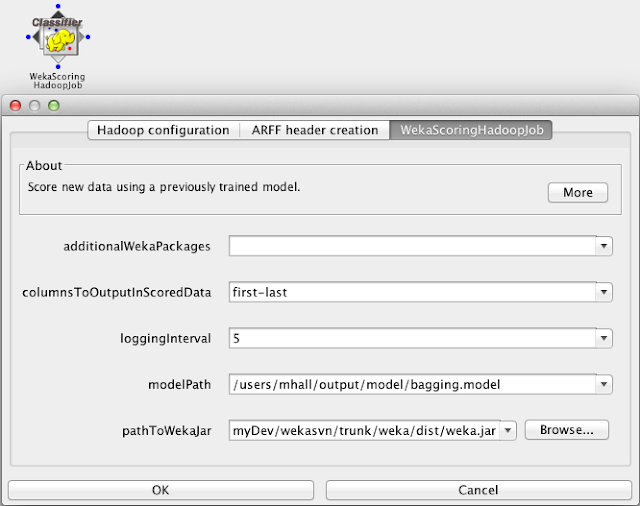 The map tasks output CSV data in the same format as the input data but with the predicted probability distribution (comma-separated label:probability pairs) appended to the end of each row. The user can opt to output fewer than all the input columns by setting the "columnsToOutputInScoredData" option.

The Hadoop jobs can be chained together using the sequential execution facility in the Knowledge Flow and/or new "success" and "failure" event types. The following screenshot shows a flow that: 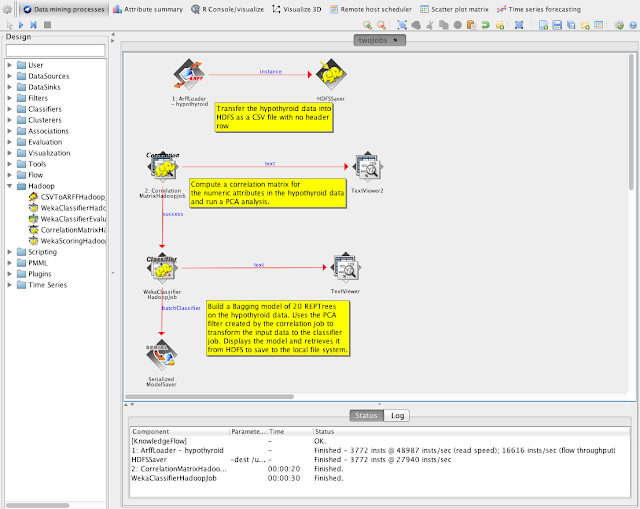 As mentioned in the first installment of this series, all the jobs have an extensive command-line interface to facilitate scripting.

A note for Windows users

If you are running the Weka jobs from Windows and your Hadoop cluster is running on *nix machines then you will run into an issue with the classpath for the map and reduce tasks on the *nix side of things. It turns out that setting the classpath for a Hadoop job programatically uses the path separator character of the client system (naturally I guess). So under Windows the ";" character is used to separate entries in the classpath that is set in the Configuration object for the job. This will result in ClassNotFound exceptions when the job is actually executed on the *nix cluster. To get around this the Weka jobs will postprocess the classpath entry in the Configuration to replace ";"s with ":"s, but only if you tell it that you're running a Windows client against a *nix Hadoop cluster. To do this you just need to set the environment variable HADOOP_ON_LINUX=true. This is pretty hacky and if anyone knows of a more elegant solution to this please let me know.

Benchmarking on the KDD99 data

I ran a quick test on the KDD99 data set (just under 5 million instances, 42 attributes and 23 classes) on Waikato's Symphony torque cluster (quad core i7 processors at 2793 MHz). I set up a 10 node Hadoop cluster and ran a 10-fold cross-validation of a random forest consisting of 200 trees. The job involved creating the ARFF header, creating 15 randomly shuffled input chunks and then the evaluation itself. This took just under 5 minutes to run. Subsequent runs of 10-fold cross-validation using the already created input chunks took about 3 and a half minutes. 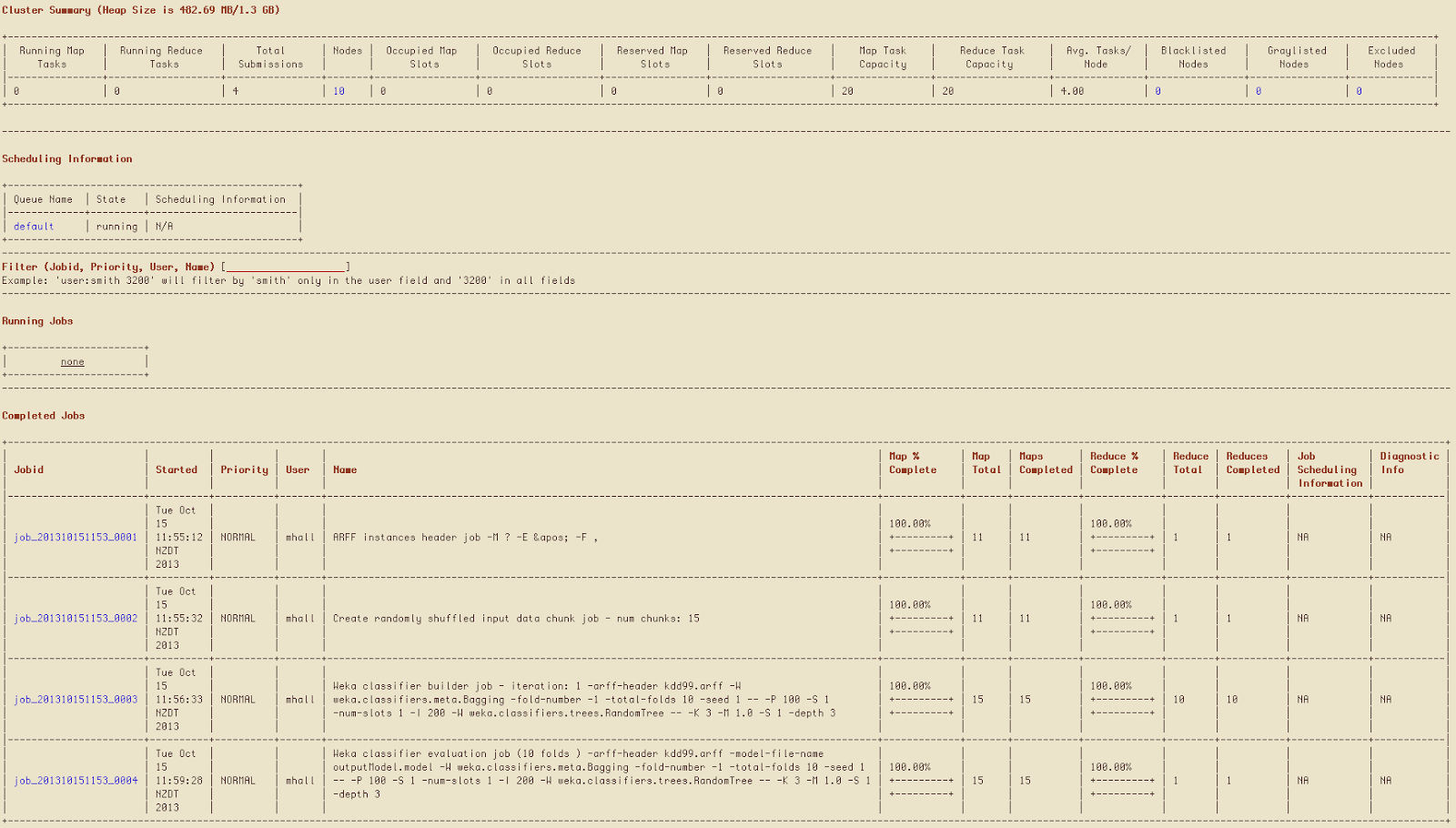 Next I doubled the size of the input data (just by duplicating the kdd 99 data), to give just under 10 million instances, and launched a 15 node Hadoop cluster. I ran the same job as before but increased the number of randomly shuffled data chunks from 15 to 30 (in order to keep the amount of data entering each map the same as before). This time the job ran in 4 minutes and 23 seconds (the average over several repetitions was about 4 minutes). Although each map is processing the same amount of data, the faster run time is explained by greater parallelism - each map in the model building process now only has to build half as many trees as it did in the first job in order to generate a forest of 200 trees. 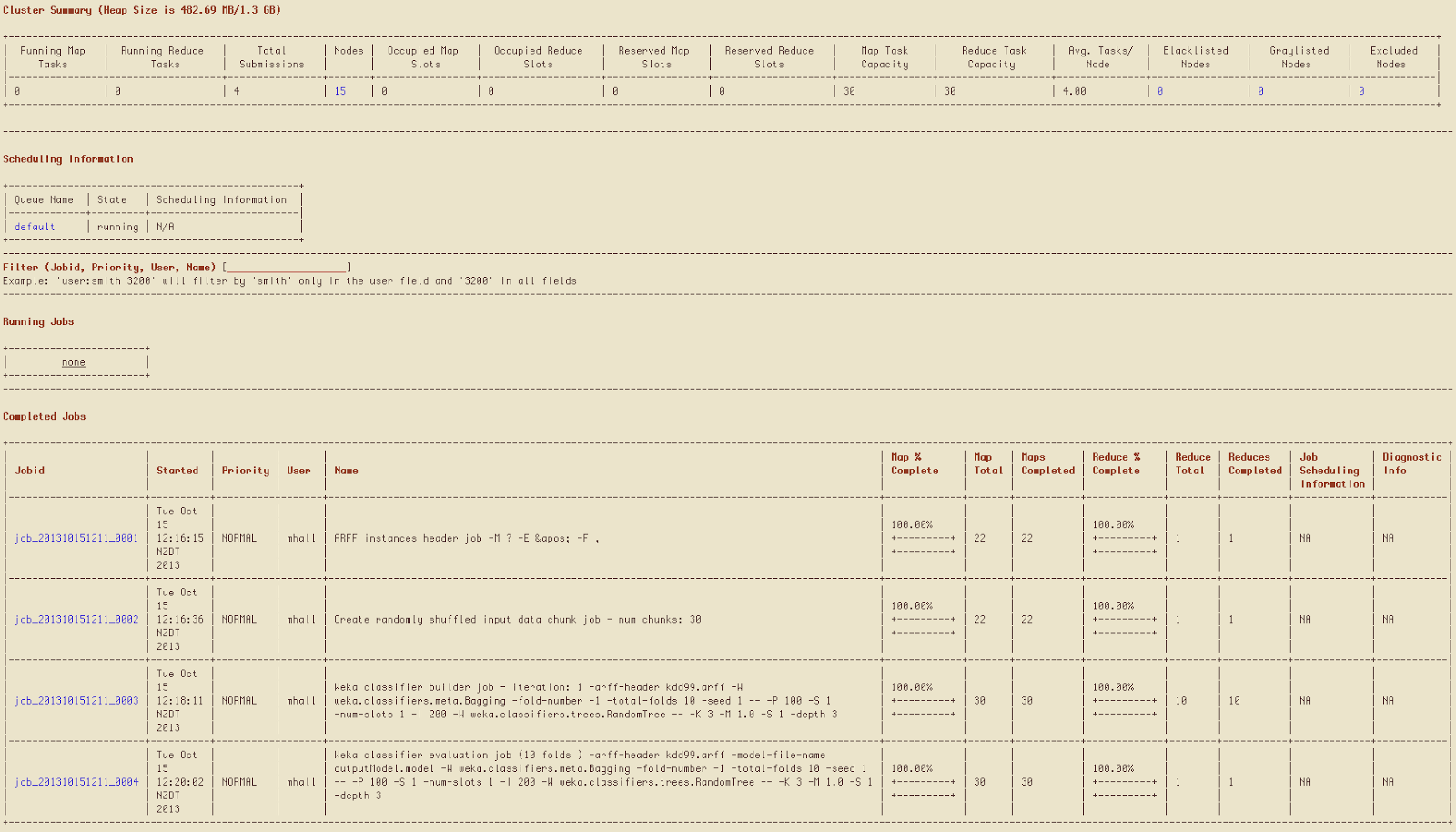 There is a bunch of stuff that could go into future releases of the distributed packages. Some things I'd like to add for the next release include: